From Solent to the Menai Straits Part 3

The wind was back – still NW but now 5-6. But it meant a fairly fast passage along the coast with a smoothish sea. That is until we arrived at the Fal. Here the wind seemed fresher and the waves short and choppy so it was an unpleasant crossing. I was pleased to arrive in the shelter of the Helford River, where although the wind was still strong the water was flat. Durgan Bay looked very attractive so I anchored near some other yachts here. Drinking tea in the cockpit and watching my transits as I always do for a while after dropping the hook, I thought we are moving and we were. Haul in the anchor hand over hand, I’ve no windlass and I bought up a huge clump of weed. Ah ha, OK try a different spot. Trouble was the end result was the same, boat dragging with a weed clogged anchor. Now this was the first time that I have ever had an anchor drag and I have done a fair bit of anchoring. What I couldn’t figure out was how come the 3 or 4 other boats were all anchored in the same area and holding OK but not me. Anyway rather than try again and perhaps pass a restless night wondering about whether I would drag again, I upped and left and picked up a visitors mooring in the Pool.

31st May Helford river to Newlyn- round the Lizard 43nm

Before departing the Helford river the next morning I ran up to Frenchman’s creek – indeed a delightfully unspoilt place.

The wind was still NW but lighter today perhaps 3-4 with lighter interludes. First objective was to pass outside of the Manacles Buoy and then set a course for the Lizard. There were two sails some way in front, gradually I overhauled one, the other was out to seaward but I rounded the Lizard before it. Later it overhauled me, bound as I was, for Newlyn. Before the Lizard we had been on a beam reach but then we hard to harden up and some we were tacking all the way to Newlyn. Inside the harbour I discovered that they had installed some yacht pontoons but all were full. I rafted up alongside “Salty Bear” – two bears nestled together.

First light saw me leaving Newlyn harbour. For once we had a beam wind for the run  down to the Runnel Stone, but I knew it would turn against me soon. Nearing the Runnel Stone  we started picking up the Atlantic swell.

With Longships in sight I could not lay a course towards it, headed by the wind yet again and the seas was more confused and lumpy.

Having past Longships light – at some distance off, the next tack took us towards the Brisons. It was apparent that this NW wind was going to persist – it had for days now. Padstow did not look a viable option, limited tidal access, a bar, onshore winds all spoke no no. So I made the decision, that I had been considering, across to Milford Haven. It would be long haul.

Later a wind shift allowed me to set a courses directly for Milford, although I was still hard on the wind so canted over and it was still a little bumpy.

I decided that a good dinner would be in order, so I lit the Taylors stove and popped some potatoes in the oven to bake. To go with them I prepared some fresh handmade coleslaw salad with real mayonnaise and grated cheese and Branston pickle. Sod it to convenience food, lets do it in style.

Having fed the inner man I made my preparations for night. I took a precautionary reef in the main and had considered a roll or two of the yankee but the reef in the main sufficed. Then on with the night attire.  Fleecy thermal trousers, fleecy tracksuit bottoms, merino wool socks, thermal long sleeved vest, thermal shirt, woollen jumper, fleece jacket, Guernsey sweater, topped of with sailing suit, woolly hat and leather sailing boots. I didn’t intend to get cold.

As night fell I was out of sight of the coast apart from the light of Hartland Point away  to the East. Throughout the night I took a few naps of 15 minutes after scanning carefully all around. I saw no ships all night but later the lights on the tall chimneys of the Milford refineries told me I was on course. Long after the sun had risen, the dying wind backed more Northerly, I could no longer hold a course for Milford Haven and since the tide would in a little while turn eastwards, I motored the remaining distance to enter the Haven and anchored at Dale. Time to sleep away the rest of the morning.

A fine sunny day but not much wind as we motored away from Dale, around St Anne’s Head and towards Jack Sound.

This was negotiated without incident, a little early as the tide was still running against us, but not too much. Still no wind all the way across St Davids Bay, nor through Ramsey Sound nor indeed all the way to Fishguard. Once anchored here I made use of the still conditions to jumar up the mast and re-align the wind indicator which had been poorly fitted by the riggers and had worked loose and was flopping about, neither use nor ornament. 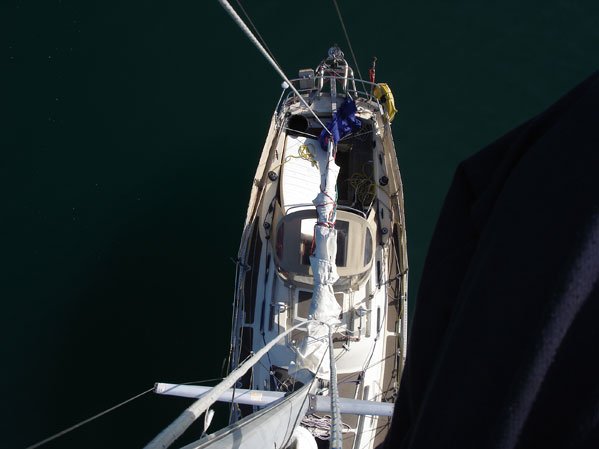 Sea Bear from up the mast

I weighed anchor just after first light to catch the north bound tide. At first, motorsailing but a little later the wind filled in a little and I could sail. Full main, yankee and staysail. Ah but guess what direction was the wind?  North Easterly. Whatever has happened to our prevailing SWesterlies? For some time I could hold my desired course but later was headed so motorsailed again. Having given some more thought to the situation I decided to revise my plan and not aim to pass through Bardsey Sound this eve. The wind had gone around to NNW and I could lay a  course for Abersoch and could sail once more.

Later having picked up a vacant mooring at Abersoch the wind returned to the NE so we had a rolly night of it.

If I was to get to my mooring today I had 3 tidal gates to catch. The first and nearest Bardsey Sound was fairly easy to time. The next, entrance over Caernarfon Bar was about  30 nmiles further on, but  with a fairly generous window shouldn’t present too much of a problem. The third, passage through the Swellies was the crunch one with a small time window.

I decided to be early for Bardsey Sound and make use of the eddies to sneak though. It had been fairly windy all night but within 20 minutes of leaving Abersoch it was a flat calm. I dawdled on the way to Bardsey and had a little time to  kill at Aberdaron so drifted pleasantly a while in the bay before sneaking into the Sound hard by the rocks.

I had to venture out near the main stream to pass the rocky islet of Carreg Ddu, but then could cut back close to the mainland shore. By the headland of Braich y Pwll the main stream was still running hard against me and quite turbulent, but there was a narrow strip of quieter water close to the cliff which I used. Close in the water is still very deep and you can pass scarily close in. So close I could have a conversation with a man fishing off the rocks. I was soon through and on my way down the North coast of the Llyn.

I arrived at Caernarfon Bar in perfect timing, 3 hours before HW, all the channel buoys were on station and helped by the flood we were soon speeding up the Straits. At the Swellies, timing was about perfect again and I was soon picking up my old mooring. Just left a quick tidy up of boat, a run through of leaving the boat procedure, seacocks closed, batteries off, rubbish out, all secure etc and I set off in the tender. Don was at the slipway to greet me and the pub handily placed for a pint to salute a successful cruise /delivery trip.