Travails of Fitting Out

As with any new to you boat there is bound to be some work to be attended to. Some you enter into purchase knowing about, some brought to your attention by the surveyors report and some are just things you would like to do.
With Sea Bear the two major jobs were to replace the stern tube rubber and strip off the many old layers of anti-foul. Having scraped off the anti foul on my last boat by hand, this was not a task I wanted to repeat. So it was a just a case of paying a contractor to do the job for me. Easier on the labour, harder on the pocket.
Replacing the stern gland I did myself. In theory a relative straightforward job, but like any job on a boat its ease or otherwise is dictated by access. To gain access on a Vancouver means either removing the engine or laying over it to reach the stern gland. This I discovered is not much fun.
Once the old stern gland was removed I decide to replace the whole thing. Accordingly I had a new stern gland/stuffing box made up for me. Maybe I am a little old fashioned but I prefer the traditional stuffing box over other shaft seals. This I fitted with a remote greaser. 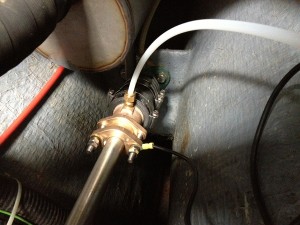