To Rabi island and elsewhere

Eventually the forecast was looking better and I left Savusavu. First hop was just about 5 miles down the coast to anchor by the reef just past Costeaus resort. 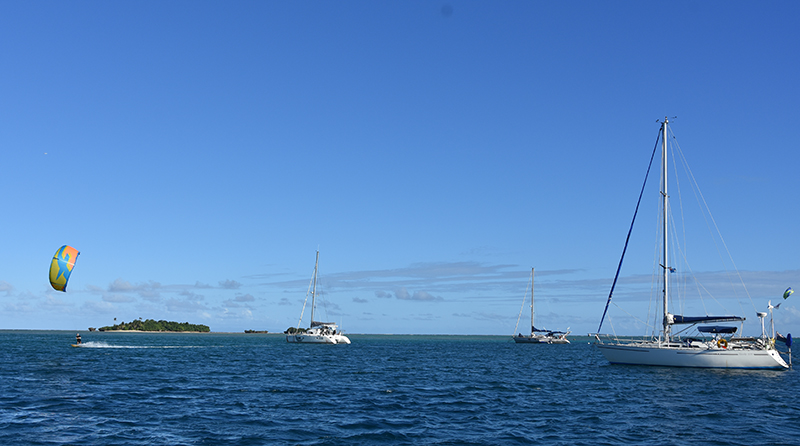 It meant the saving of about an hour on the next day a day to round passage point and head east along the coast. It meant motoring most of the day but I did a couple of hours sailing in the middle of the day before the wind died. The entrance through the reef to Fawn harbour had a dog leg but visibility was good and safely inside I crossed the lagoon to anchor. A very peaceful tranquil place this, just the distant roar of surf on the reef. I stayed the next day having a peaceful but lonely birthday. 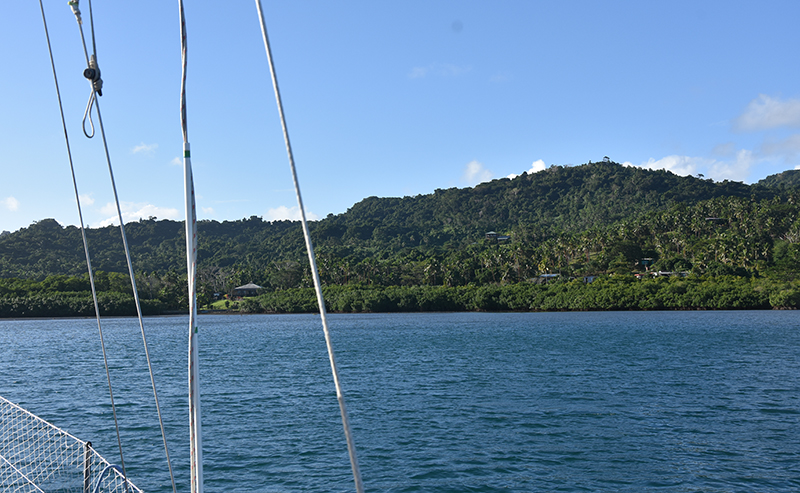 Leaving through the tricky entrance then east again, a flat calm so more motoring. I headed for the reef entrance of Vivani then carried on around the SE tip of Vanu Levu and up to the narrow mangrove lined bay of Naqaiqai. The wind was back but anchoring in 6m the holding in mud was good and the water sheltered. Next day was blowing hard so I remained here.
Next place to visit was Bucca bay, passing Kioa island where they were out fishing from their outrigger canoes. It was calm when I got to Bucca but no sooner having dropped the hook the wind sprang up blowing from the NE. The bay is open to this direction so a chop soon built up. Nevertheless I did go ashore for a walk. I thought that since there was a wharf that a ferry went from served by a bus from Savusavu there might be a shop, I could do with fresh bread but there was none. I did get some pink bananas though and some nice ginger.
It wasn’t really on to stay overnight on account of the wind and chop so I ups anchor, retrace my track to Kioa island. Entering the bay by the village I thought better of anchoring here, I couldn’t find anywhere suitable shallower than 20 m and the bay wasn’t sheltered in the prevailing conditions. I nipped back across to Naqaiqai. I would have liked to visit Kioa, the inhabitants are from Tuvalu, 800 miles to the north, displayed to here when their own island was threatened by sea level rise from Global warming. 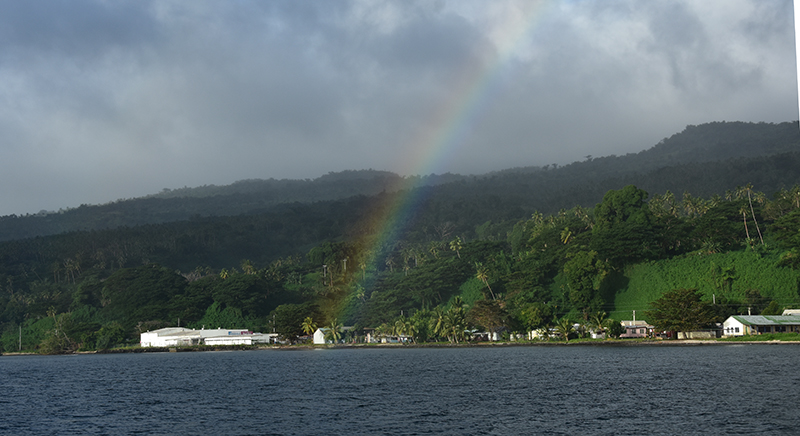 I crossed the Somosomo strait to anchor of Somosomo on the island of Taveuni. A couple of the world ARC boats were anchored here. The anchorage doesn’t have a lot to recommend it apart from giving easy access to the shops. I bought a new sim card for the phone, had a chicken curry and bought fresh vegetables and bread.
The weather forecast was for a trough to arrive bring strong winds rough seas and much rain. Time to seek some shelter, the best prospect seemed to be Katherine bay on Rabi island. I had a bit of a rough passage back across the strait, winds gusting to 27 knots and breaking seas. The fringing reef of Rabi is about 4 miles offshore, the passage in not marked so some tension. Once inside the reef I had hoped the reef would break the waves and calm the seas but the reef is not shallow enough so it was rough all the way in finding a careful way between the inner reefs. Once inside the bay although the wind was till strong the seas were much calmer and I anchored in 9 m much relieved to be in.
Rabi although part of Fiji is populated by Banaban Islanders from the Gilbert Islands (now Kiribati). Their island was made uninhabitable by the extraction of phosphate a tragic and heartbreaking story caused by corporate greed and British government connivance.
You are supposed to report to the Rabi police here so according I took the morning bus, a 4wheel drive truck with bench seats, to Nuku the capital. There is just the one road on Rabi, well a dirt track really that runs through the jungle and along the coast. Nuku is not much of a capital, a village with just a few official buildings. None of the official building were occupied but enquiries pointed me to the policeman’s house- it was the one with the police bike outside. One oh his sons raised him from a nap and I presented him my papers and he made a few notes in a note book. It hardly seemed worth the effort. It was now about 11 in the morning, the next truck back I was told was not until 3. There was nothing to do in Nuku, so I decided to set off walking. 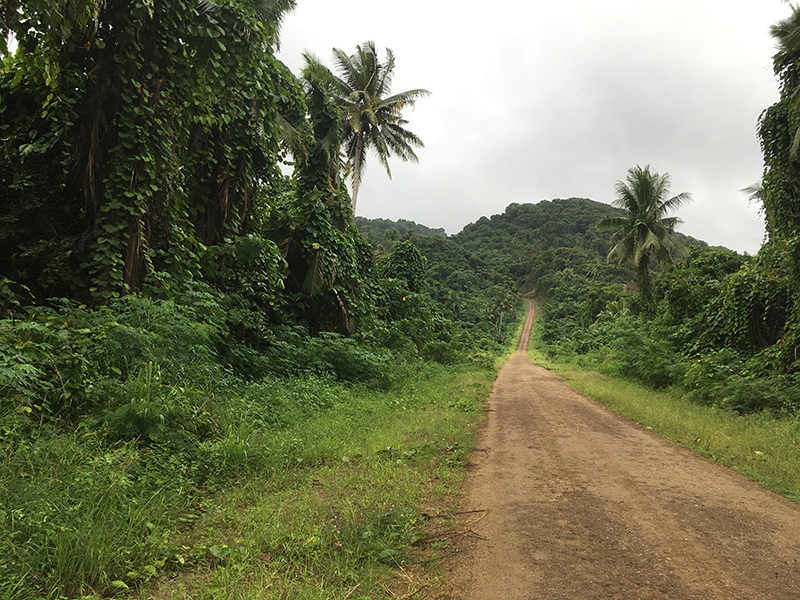 It’s always a nice way to see more of a place. Past a few small villages where the kids always waved and the adults greeted me with Mauri, the traditional greeting. I was the only white face around. The people are different from Fijians much more like Indonesians I thought. 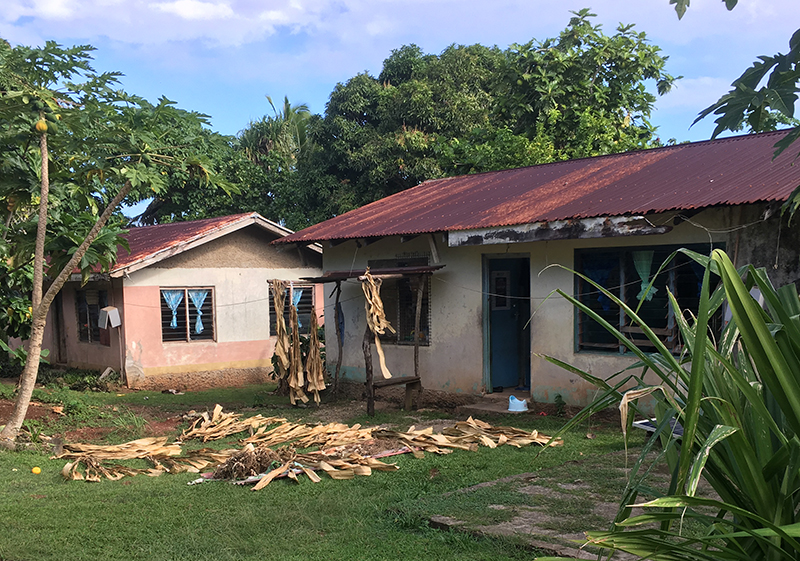 I ended up walking all the way back, took me over 4 hours the last hour in heavy rain. Not one piece of traffic passed me in all that time. Passing by a house in the last hour as the rain came down I was called over to the veranda where gathered about 8 or 9 menfolk. A big bowl of grog (kava) was being passed around so I was pressed to partake, there is a fairly strict equiquette to this the cup is handed to you by the person on your left, you are supposed to drain the cup in one whereupon everyone gives 3 soft cupped hand claps. The elder here said he must sing for me so he sang and performed a meke dance partly in English partly in Kiribarti. He said there must be 3 songs and 3 bowls of grog. It was entertaining and enjoyable. Then I resumed my trudge back in the rain to the dinghy and so to the boat. Back aboard I stripped off in the cockpit so as not to take the wetness into the cabin.
The bad weather had certainly arrived but the anchorage was snug and secure.

Some days later I moved around to Albert cove towards the north of the island. Getting in here was a double reef entry, first an outer reef then an inner reef to gain entry to the cove itself. All reefs unmarked of course, I was glad the light was good enabling you to spot the shallow water, even so it is a bit nerve wracking.
The cove was a lovely spot, yellow sand beaches backed by coconut palms. Only a couple of people live here to harvest the copra, there is no road or track access, just by boat. 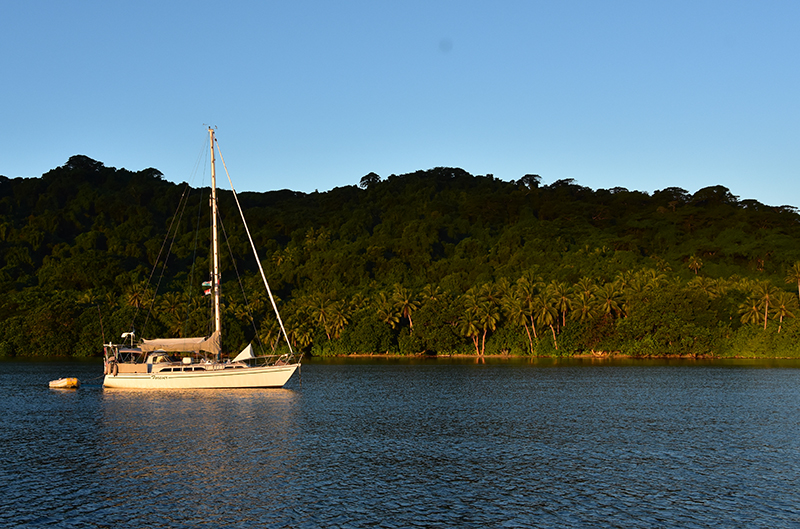 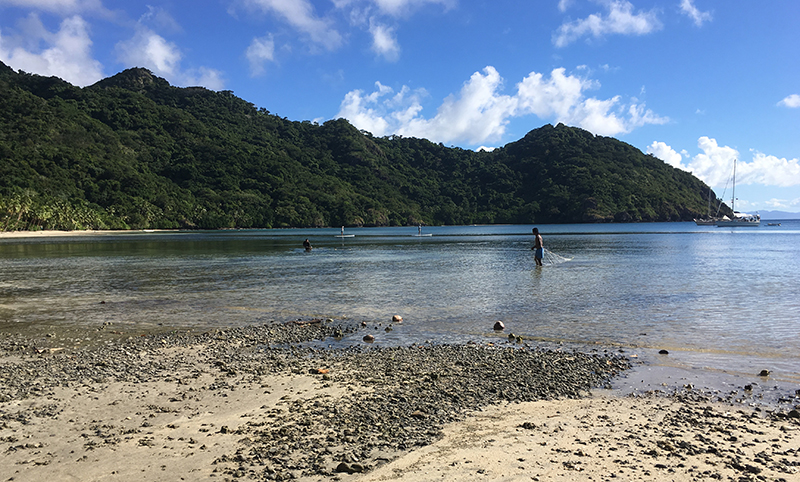 After a while here I decide to go back to Somosomo, I was long out of bread and fresh veg. Good light is needed to get out of the cove so an early start is ruled out, the sun needs to be well up in the sky to see the reefs clearly. It limits your sailing time to say between 8.30/9.00 am until 4 pm
I didn’t have enough time to make it in one hop so stopped again in Katherine bay.

Back in Somosomo I was disappointed – there was no bread. Apparently no flour on the island because the ferry to the island from Suva had stopped running. I didn’t get the full story whether this is temporary or full time.
The anchorage at Somosomo is I find too rolly for comfort so I moved about 6 miles to the north of the island. Matai was recommended in through the reefs with flat water but the light was poor when I arrived and I didn’t like the look of it so went back half a mile to another anchorage off a beach.