It was not long after first light and sortly after low tide when I slipped the mooring and headed off down the river. I had arrived at the boat the previous afternoon. There was no one else about at this early hour and if I had been more virtuous I would have arisen a little earlier to make the most of the tide, but sometimes the comforts of a warm bunk and of leaving when it is  light rather than in the dark are too strong. There was no wind at first but just short of the docks of Felixstowe a gentle breeze sprang up and all sails were soon hoisted. Past Harwich and I could set a course close hauled to take me down the Medusa channel with the benefit of the flood tide under me. The wind direction was not ideal as my course was taking me out towards the Gunfleet Sands. There was low cloud so the all that could be seen of the wind farm were the towers, the rotors hidden from view. When the Gunfleetold light came close it was time to tack to avoid running into the Sands. With this new course combined with the change in direction of the coast I could lay the Knoll north Cardinal . Gradually the cloud was lifting and the sun was making a sporadic appearance. We weren’t making a fast passage but it was pleasant easy sailing none-the less. Passing the Knoll a slight course alteration took me to the Eagle and thence the Colne Bar buoy and I could, with the wind astern, run into the Colne. Going into a new place always leaves one slightly apprehensive, transferring ones interpretation of the chart into what is before ones eyes is where the strain of single handing becomes most apparent. Have you got everything right? Just where are you going to round up to hand the sails, have you identified the creek entrance correctly, where is best spot to anchor? So it always somewhat with relief when you finally let go the hook, stow the sails and get the kettle on for a brew. I was anchored just inside the entrance to Pyefleet Creek and in enough water to stay afloat at low tide, though I was assured that should I touch, the mud was soft enough that I wouldn’t know the difference. 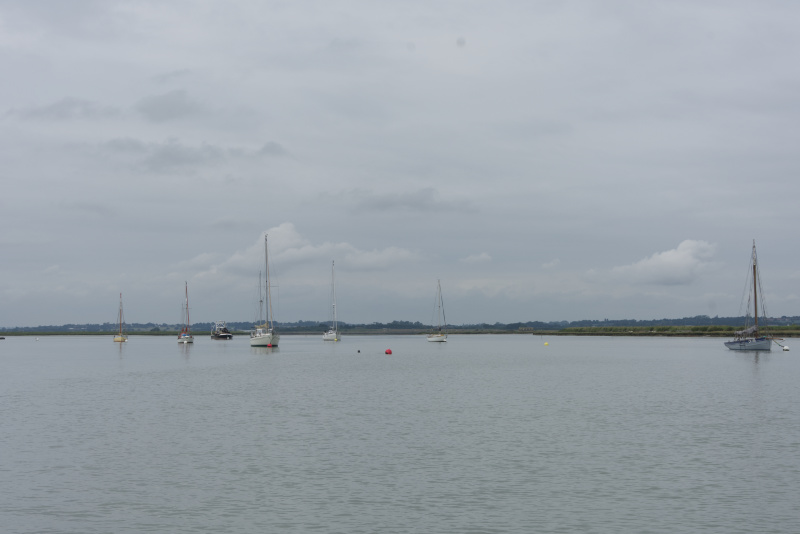 Next morning there was no wind, grey skies and with rain or drizzle from time to time so I was quite content to remain peacefully at anchor and watch the world go by and the birds feeding along the shore line. I watched a nice smack, the Maria, hoist all sails and then because of no wind get pushed by its tender. Never seen a smack pushed in this way rather than being towed. Much later they were back, pushed again so it must be their usual thing. 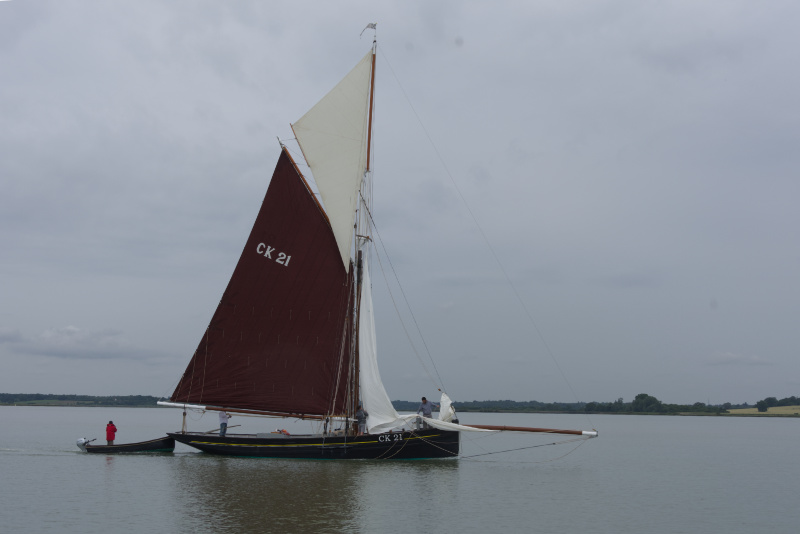 The next day there was some wind so I sailed around to the Blackwater and up this past the moored Radio Caroline just past Bradwell and so up to anchor in the lee of Osea Island. It being Sunday afternoon there were a number of mobos here but they all cleared off later. It is a shame about the private notices on the island, it would be nice to be able to go ashore for a walk here. The forecast was for the wind to go around to the NW and blow rather strongly so I reckoned I was in a good spot here. 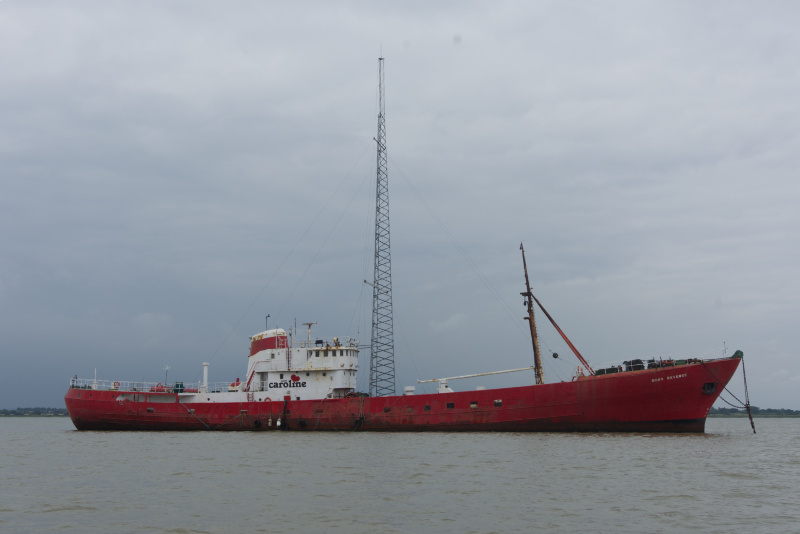 Radio Caroline up the Blackwater

When the wind had moderated a day later I shifted around to the Crouch. Out by the Wallet Spitway I was headed by the wind then it fell calm so I ended up motoring through the Spitway. I hadn’t felt bold enough to take the shorter way of the Ray Sand passage so took the long way around. I took the Swallowtail channel to join the Whitaker and so to the Crouch. I had thought to anchor up the Roach but the wind was back northerly and strongly  blowing 20 knots or more straight up there. Undecided whether it would be good or not to anchor there I continued on up the Crouch, after a while this didn’t seem like a good decision, the tide was running strongly against me by now, the wind continued blowing strongly and it took what seemed like ages to get past Burnham and up to anchor by Cliff Reach. Here the shelter I thought it had promised proved purely illusory. Nevertheless I was glad to get the hook down and get the tea on.

I stayed there the next couple of days when the wind continued strong and most of the next when the wind eased. One afternoon I took the tide up the river to explore the upper reaches and then back down to re-anchor at Cliff Reach. The forecast had been for strong northerly or northwesterly winds for days, not so good I thought for beating back up the Wallet but at last the wind force was dropping perhaps becoming calm although the direction remained unfavourable for heading back North. Anyway I thought better some wind even if not in a good direction than no wind  which would mean motoring which I hate.  So early one morning, bucking the last of the flood I headed down the Crouch and out via the Whitaker channel. Close hauled I could almost hold the course, I just needed one tack back across when we we forced too close to the Foulness Sand. It had started out windy and choppy but gradually the wind eased and it became a pleasant sail. Past the Inner Whitaker and then short of the Whitaker cardinal I tacked towards the Swin Spitway  to cross the Spitway to enter the Wallet. Long tacks up this until short of Frinton-on-Sea where I realised I was losing the battle against the tide  with each tack away from the coast loosing me almost as much ground as I gained tacking shorewards. On with the engine then to motor sail to get past Walton and the Naze. Past here a better angle enabled me to kill the engine but the wind was now dying away so it took a long time up the Medusa. Approaching Felixstowe and suddenly without warning the wind was back 20 +knots so we started to fly but with too much sail aloft to be comfortable. I furled the yankee, would have liked to put a reef in the main but was suddenly in a lot of traffic, other yachts, ferries, fisherman and workboats so concentrated on getting though all this safely. Past the docks the wind departed almost as suddenly as it arrived so a quiet run up the river until the wind died just short of the mooring. Back on the mooring I could put the boat to bed as it were.  Later in the eve as I was to turn in for an early night there was a tremendous amount of splashing. Emerging in the cockpit to find out what it was all about I discovered a seal aboard the dinghy, it seemed to be settling in for the night. It was still there early next morning andI had to shoe it away before reclaiming my dinghy and heading ashore and so to home. It had been a reasonably successful exploratory trip despite the unsettled and inclement weather. 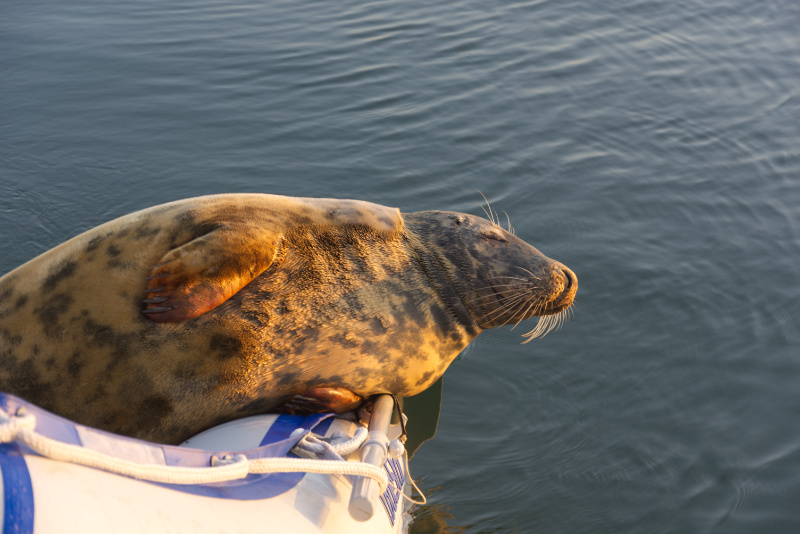 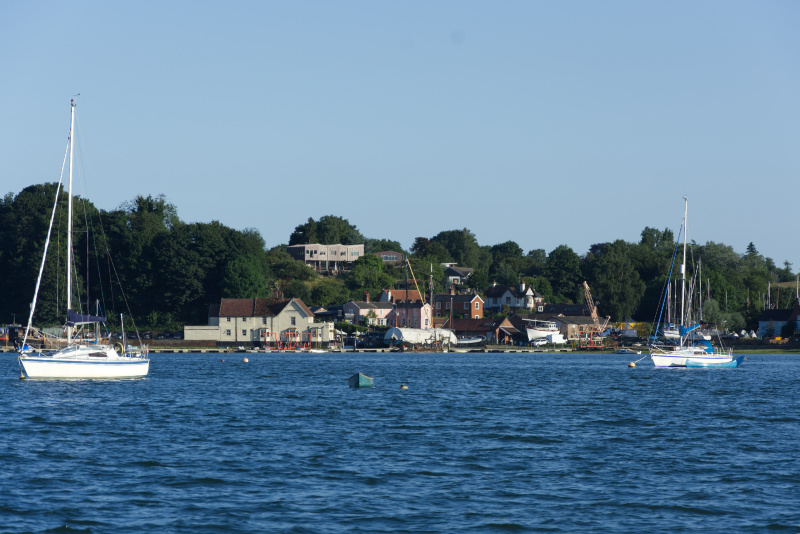 Pin Mill from the mooring