I left Lemmon Cays soon after first light, as soon as the light was good enough to see the reefs. Out past the reefs and breaking surf I could set a course to clear the reefs of Porvener. A close reach this wind about 20 knots and a reasonably lively sea. I chose to get enough northing in to clear all offshore dangers meaning I could run down my westing free in that knowledge, rather like the old time clippers used to do. Once out at 9 degrees 38 minutes I turned westwards, putting Sea Bear on a beam reach and she fairly romped along. Much later the average speed on the log was showing 6.1 knots, good going indeed for us.
Rounding Isla Tamba and Isla Grande we were in good time and so instead of going in to Isla Linton to anchor I carried on to Portobello. The wind had eased a little over the last hour but rounding Drake Island and within sight of the anchorage with the log showing 60 miles covered in 10 hours, it died completely. No problem I thought I’ll just motor the last mile to anchor, but problem there was. The engine did not start, it would not even turn over but was locked solid. An initial assessment showed me that it wasn’t something I could fix right then. With wind I could have sailed in but there was none. I called up some cruisers in the bay over the vhf and explained my position so they said they would come out in their dinghies and assist. Before they arrived though a little breeze came back so I sailed towards the anchorage, the dinghies dully arrived and shepherded me to anchor. I was grateful for their support.
Safely at anchor it was out with the tools, out with the injectors, off with the exhaust elbow and drain all the seawater out of the engine and crank by hand to blow the remains out. Put it all back together and mercifully the engine started and ran. I warmed it up to drive out any moisture lingering. Finished well after dark and then I could make a cuppa and cook dinner. Puzzling over why this had happened I investigated further and discover the air inlet pipe to the anti-syphon valve was blocked, allowing sea water to syphon in to the exhaust manifold and thence the engine, Easily solved that but worse was that the exhaust elbow was corroded inside – only cure for that a new one.
Spent a couple of day at Portobello then headed off to Shelter Bay, turned out to be a very windy day and approaching the breakwater rain squalls too. Dodging both and outgoing and ingoing big ships I entered the breakwater and so to moor alongside in Shelter Bay marina. Time to try and get a new exhaust elbow and start with the canal paperwork.

We are afloat At long last Sea Bear has been launched and we are afloat moored to a pontoon in Swanwick marina. It has been a long haul and with many frustrations with dealing with the boat yard and contractors to get all the work done. Even now there has been a last minute hitch as the riggers haven’t fitted the new vhf aerial. It’s enough to try the patience of a saint. But we are all provisioned up and passage plans made so tomorrow should see us set up for our sail from the Solent up to North Wales. 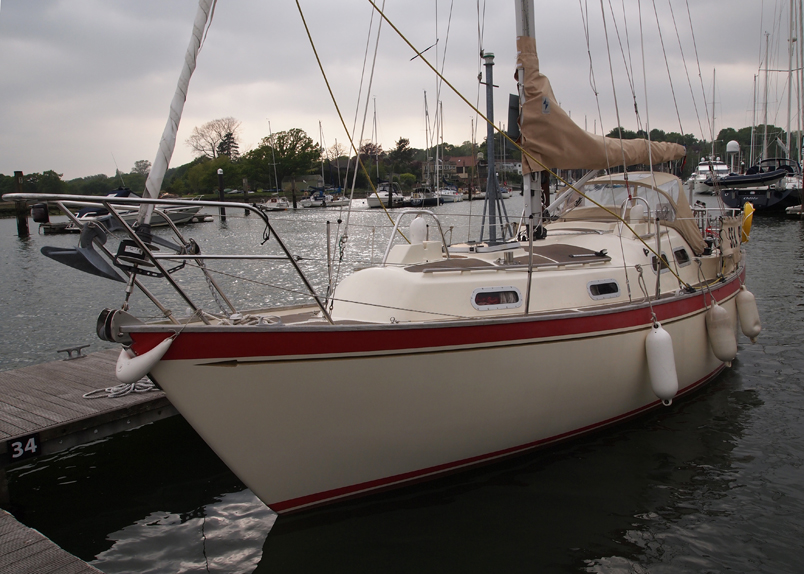 The weather has not been kind for fitting out and so I am a bit behind. I had planned this weekend to be a big push to move things along. Instead I am snowed in at home. Still I thought I could do something useful. I’ve been a sailor for over 10 years now and I had never spliced multi braid rope. High time I learnt.
The mainsheet traveler control lines on Sea Bear were attached to the traveler by passing through an eye with a stopper knot to secure. Awkward, ugly and lubberly it called out for two eye splices.
So it was out with the fids, read the instructions and watch tube videos. I made my first mistakes on a bit of gash old rope before turning to the control lines proper.
Here it is my first multi braid eye splice. 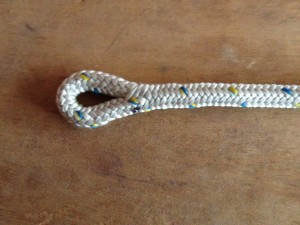 A new boat for the Skipper

Having sold my last boat (Dansa) in May I was on the lookout for a new one. For a while I had been undecided about buying another boat but the lure of the sea and sailing was too strong.  It had to be the right boat of course, not too big, not too small and I had, in the course of a few years sailing, drawn up  a list of desirable features, which resulted in a shortlist of boat types.  For various reasons that list had been whittled down to two and then ultimately to a Vancouver. So the boat search began.

After  viewing a few other Vancouvers,  I spotted Sea Bear for sale and as soon as I viewed it thought “This is the boat for me”. So I  put in an offer, had a survey done and come to an agreement with the owner over the price.

Then it was the big day, I met the owner Michael and he showed me over the boat and showed me where things were and the operation of things. This included lighting the Dickinson Stove. As it was a damp and drear day this was appreciated and the cabin was soon snug and warm.

Paperwork all completed and Sea Bear was mine. Later I walked to “The Jolly Sailor” for beer and a meal, returning later to spend my first night on the boat. 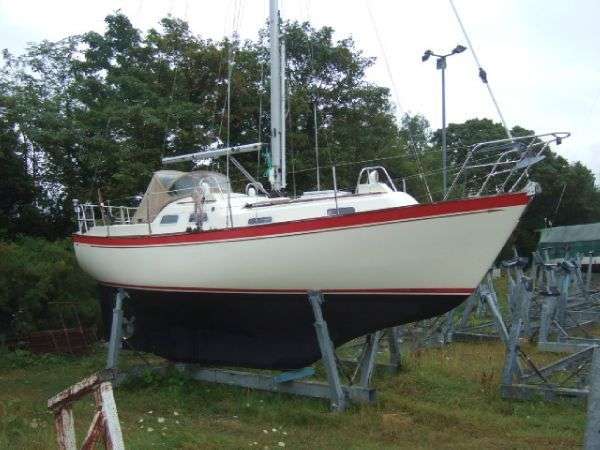