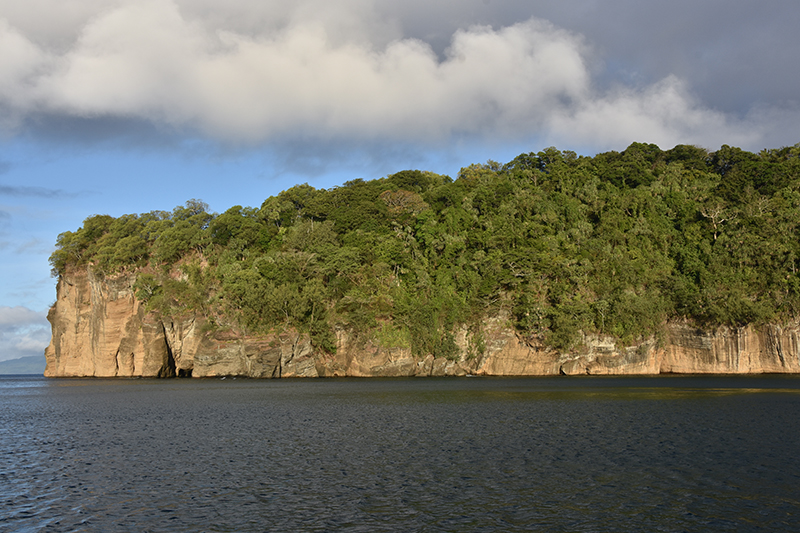 I had meant to leave Vahine Bay early for the passage to 48 miles to Espiritu Santo but I was awake very early indeed and failing to get back to sleep thought I would get up and leave anyway. So by 3.30 I was underway, still dark of course but no problems or dangers leaving the anchorage in this bay. Following the coast westwards I just needed to keep far enough offshore to avoid the Minerva reef. I had put a waypoint in the plotter to assist here. Later as the light grew I was joined by a group of dolphins, always a delight this. It had started calm and so motoring but gradually the wind filled in SE 12-15 knots. It looked like I might be in for some rain squalls as we were heading for a line of them. Somehow though we managed to slip though, one passing in front and the next just passing behind. Much later I was approaching the Diamond passage which gives access to the big lagoon between the outlying islands and the main island of Santo itself. The passage was hard to make out from a distance but became clearer as we neared, helped by the prominent rusty wreck of a freighter  on the reef of the southern point of Aise island. Diamond passage proves no difficulties at all it being wide and deep. Inside I turned south, thinking to anchor at Palikula bay. The approach was complicated with a narrow and shallow entrance between unmarked reefs, just the water colour to guide you where the reefs lay. I got through the first set and anchored in the recommend outer position. I could see a boat at anchor in the inner bay but I didn’t fancy the way through without a spotter on the bow. I didn’t like where I was, it was calm but a long way from shore and surrounded by reefs I felt trapped. I made a cup of tea and had a bite to eat to recover my composure then weighed anchor and very carefully retraced my path in. Out clear I could breath a sigh of relief and head up to anchor north of the Diamond passage  in the lee of Aise Island where I had a very peaceful night.

In the morning I decided to visit Hog harbour and Champagne beach apparently the finest beach in Vanuatu. Exiting through the Undine passage I headed north up the coast, it turned out to be a sunny day with barely any breeze to help us on our way so we motored for a large part.

Turning into the large bay of Hog harbour past Lathu island I anchored off Lonnock beach. There were a 4 boats anchored here already and it took a while to find a suitable clear patch of sand between the coral to anchor. I spent a few days here, swimming, a walk to the village, a visit to the very low key resort ashore where I treated myself to a meal. 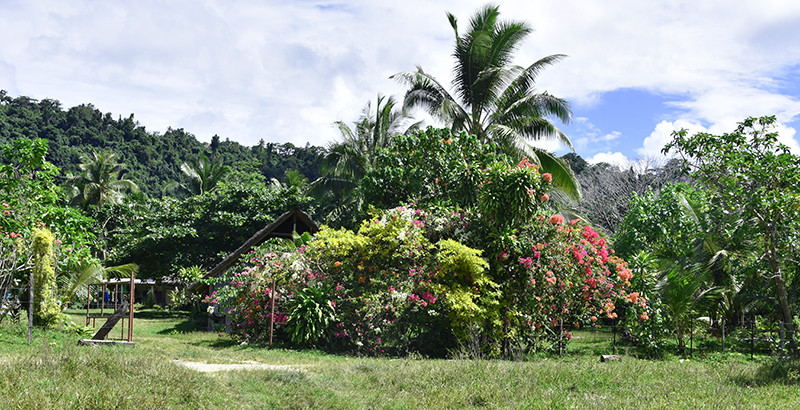 Of course I visited champagne beach in the dinghy. I found it a bit spoilt really with buildings by the beach built to cater for the tourists and jetty for the cruise ship launches.

When I left I had a hard beat back against strong SE’erlys to Aise island. This time I anchored south of the shallow patch and this was a better spot than previously. I could could creep further inshore, there was more sand , fewer bommies and I found a good spot in 6m.

There was a small (but still bigger than Sea Bear) yacht inshore of me inhabited by a French man from New Caledonia, a true “vagabond du mer” he was. We had a long chat.

There was a strong wind warning out which persisted fro several days so although I wanted to keep on moving it would not have been good to go to the anchorage at Luganville which is quite exposed to SE & E winds. I did move across the lagoon to anchor at Surundu bay. Entry was through a fairly narrow passage in the reef but the seas were breaking heavily on both sides which at least gives you a good indication where they are. The deep water in the pass is fairly close to the northern reef so it was a little alarming passing so close to the breaking waves. Inside was lovely and sheltered both from wind and waves.

I dinghed to the beach and hitched a lift in a pickup truck into Luganville, the second biggest town in Vanuatu where I could but some much needed supplies.

Luganville was the centre of American operations in New Hebradies during the 2nd world war and that legacy shows in the broad paved main street and a number of surviving consett buildings. 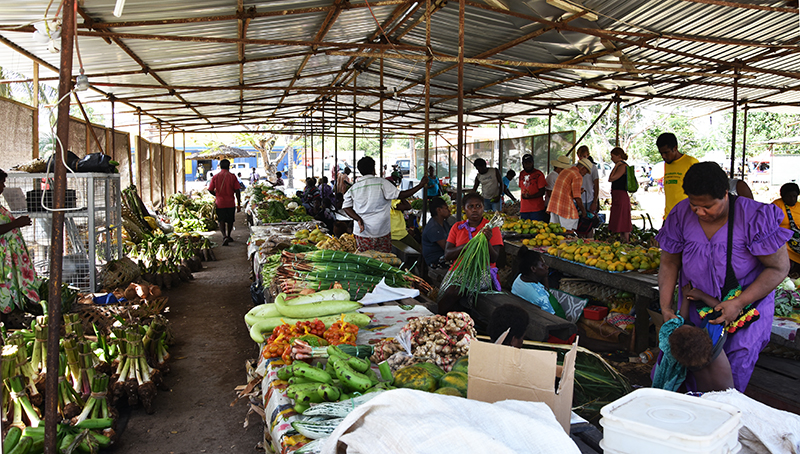 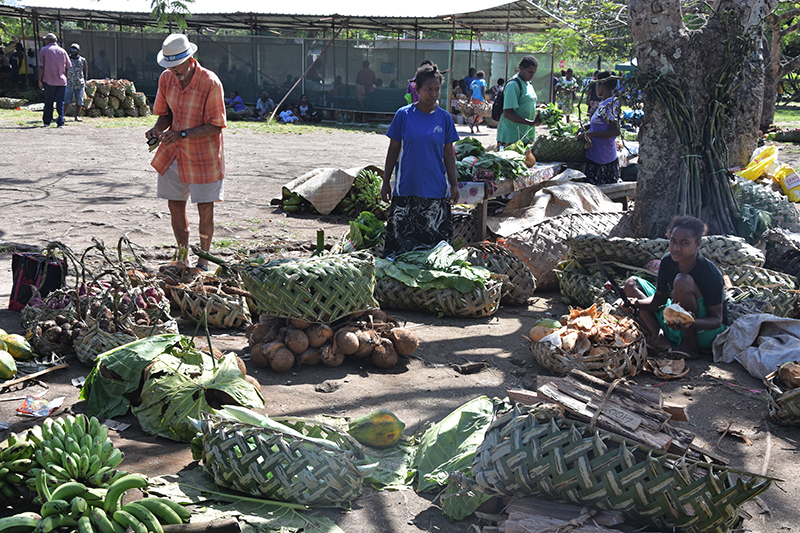 A few days later with the weather just a little not so rough I sailed around to Luganville via the Segond channel. The anchorage was a bit choppy but not too bad. I wanted to be here as this was around 14miles closer to my next objective of Malakula. This was about 35 miles away so an early start was in order. Dawn was just breaking when I left, a little way back up the Segond channel and I could turn round the tip of Aore island and head for the Diver strait between the islands of Abokisa and Tutuba. Here the wind seemed to be funnelling through the gap blowing had with a big swell so it was unpleasant for a while but through the strait conditions thankfully eased. With the wind from Se I couldnt quite set the course I wanted so I knew I would be in for a far bit of tacking. One tack S was sort of in the required direction but it gradually closed the coast so I had to tack E, not where I wanted to go to gain clearance. After several tacks I could clear the SE corner of Malo island and I know had a better slant on the wind as I headed out across the Bouganville strait towards the NW corner of Malakula. The only fly in the ointment was that it meant passing through the overfalls off Malo, but they looked worse than they turned out to be and I was soon through. Just after reaching and passing the North cape of Malkula the wind died, this wasn’t just because I was now in the lee of the island and it started to rain too, but it didn’t last long. A few more miles which seemed to take forever and I could head into Malua bay where I anchored in 7m off a brown sand beach. A fisherman in his dugout came to say hi and gave me 3 mangoes so I gave hime some fishhooks and a lure.

It had been a tough day 48 miles logged and 10 hours sailing time. 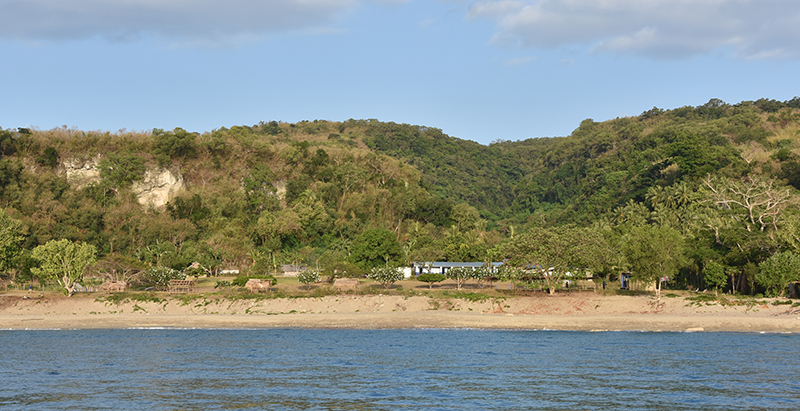 Next day was another tough one tacking first S the E with a strong SE wind 20-25 knots and a big southerly swell running. I’d left at 6 but it was after 4 when I got into Lamboubou harbour. Distance logged 41 miles I was quite sure what conditions inside here would be like as it struck me that the swell would be running straight in, but my options were limited as if was about 20 miles to the next anchorage.

As it turned out although there was some swell running in it was much diminished and the bay was completed sheltered from the wind. In consequence Sea Bear swung on her anchor to align herself at first bow on to the slight swell and then later in the night when the tide turned stern too. There was no rolling just a gentle nodding to lull you gently to sleep.

That 20 miles to the next anchorage turned out to be 30 miles after all the tacking necessary and took me 8 hours. The tacks S were particularly unpleasant straight into a big S swell with the strong SE wind generating waves on top. The only small consolation was a group of dolphins playing around the boat for a while. Eventually however we gained the shelter of Metenover or SW bay, that is shelter from the waves and swell but not the wind. I dropped the hook in about 6m. I had been feeling grumpy about this hard passage as I hadn’t eaten or drank anything since the morning but I could now remedy that.